The current generation of Ford’s compact crossover has been around since 2019 but it looks like a refresh is already on the way. The key reason is the fact that the new model isn’t as impressive as its predecessor and sales numbers perfectly show that state. That’s why the Blue Oval company is about to come up with novelties, which should make it more competitive in this super-crowded segment.

At this point, it’s still early for details but from what we can see on spy shots, the new model is about to come with novelties on both ends of the vehicle. Still, we believe that styling changes won’t be the only ones to come. We also expect to see novelties on the inside, especially in terms of tech features. On the other hand, we don’t expect to see changes under the hood.

Considering the expected updates, we believe that the 2023 Ford Escape will hit the market a little bit earlier than usual, though still within the second half of the year.

As we already mentioned, the 2023 Ford Escape is about to receive a mid-cycle update. The testing model has already been spotted and from what we can see on it, both ends of the vehicle are about to get novelties. The front end is almost completely covered and from what we can see, headlights are about to get a new, more angular shape. We also count on a new grille, as well as on a new bumper.

The rear end also wears a lot of camouflage. We presume that this update will bring new taillights, as well as a new rear bumper. Some revisions on the tailgate are expected as well. Of course, we expect to see typical mid-cycle updates as well, things like new wheels and color options.

At this point, it’s still early to talk about interior changes. The test mule still doesn’t show anything from the inside, so the only thing we could do is to speculate. Still, we may presume that most of the things are about to remain the same. Ford rarely makes interior updates during production cycles, so the best thing we could see are things like new materials, new color schemes etc. Also, we presume that the Blue Oval company will introduce some novelties in terms of tech features. For example, the old 4.2-inch display should be dropped finally, so the base versions would also come with an 8-inch unit. 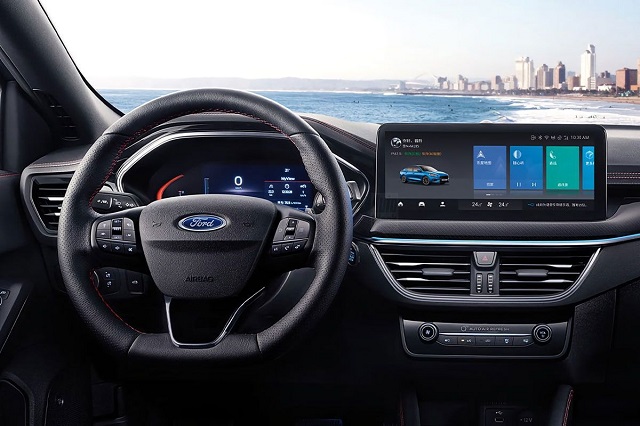 Of course, the overall cabin layout will remain the same. You may count on the same amount of passenger room, which is sufficient in both rows of seats. The rear seats also accommodate adults passengers with ease, while the cargo area offers decent numbers as well. You may count on up to 37.5 cubic feet behind the second row and 65 cubic feet of the total cargo volume.

As we’ve just mentioned, the 2023 Ford Escape could come with some novelties in terms of tech features. We just talked about the infotainment screens, but that probably won’t be the only novelties. However, keep in mind that the current model already stands pretty well in this aspect. So, the total amount of novelties won’t be all that big. The biggest upgrades are expected in the most basic versions.

Of course, there are two hybrid versions on offer as well. The first one is a classic hybrid, based on a 2.5-liter four-cylinder engine, which comes in pair with a single electric motor, for a total output of 200 horsepower. A plug-in hybrid is also available, with a more powerful electric motor and a combined output of 221 horsepower. The company also claims 37 miles of the all-electric range with this one.

Considering that there are some updates to come, we presume that the 2023 Ford Escape will hit the market a little bit earlier than usual, but still within the second half of the year. When it comes to the price, base versions should go around 27.000 dollars. Key competitors are models like Chevy Equinox, Mazda CX-5, Hyundai Tucson etc.