After the 2021 facelift and a few more updates on the 2022 model, we are pretty sure that the 2023 Audi Q5 will come without more important changes. The current generation has been around since 2018 and we are pretty sure it has a few more years before it gets a full overhaul. That’s why believe that the next year’s model could bring minor updates only. This refers to things like new standard features, as well as to new color options.

Other than that, things will remain the same. So, you may count on a familiar design, which still has a lot of good things to offer. We like its high-quality cabin, as well as lots of tech features. Also, the ride quality is on a fine line between being comfortable and sporty. On the other hand, we don’t like the small cargo area, as well as the fact that the starting price is higher compared to rivals.

As there are no significant changes to come, we expect that the 2023 Audi Q5 will hit the market sometime in the last quarter of 2021. 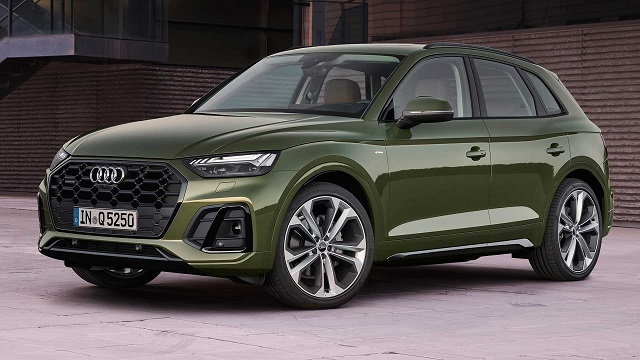 As we already mentioned, the 2023 Audi Q5 probably won’t feature bigger changes. After the 2021 update, the styling looks way better than before. It brings that Q8 flavor at the front, with a massive grille and sharper headlights. Also, starting from the 2022 model year, the S-Line appearance package is part of the standard equipment, so every Q5 now looks better than it used to be.

Considering all these things, we can conclude that the best 2023 Audi Q5 could bring are new color options, though even that doesn’t sound too likely. On the other hand, the mechanical aspect of the vehicle will certainly remain the same. This refers to the suspension setup as well, which is the part of the car we like very much. Simply, this crossover offers a good balance between sporty ride and comfort.

The 2023 Audi Q5 interior will continue in the same way too. We are about to see the same cabin design, which features great overall quality and looks nice. The dashboard combines its very conservative design with advanced tech features, which makes it look modern and classic at the same time, which means it will probably age very well. Another reason why we believe that this cabin will age well is the materials and build quality, which are on a super-high level. 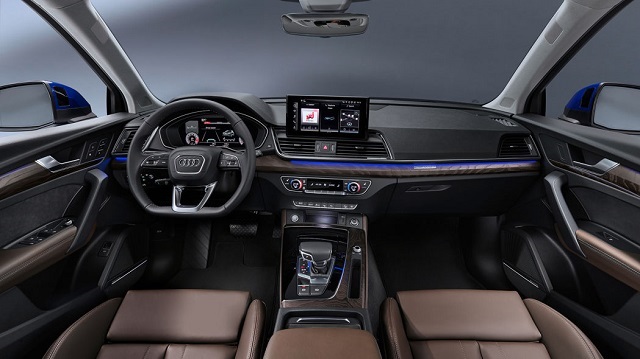 The front seats are massive and supportive, while the passenger room is generous. We could say the same thing for the second row, which also accommodates adults with ease. On the other hand, the cargo area isn’t that impressive. It offers 25.8 cubic feet behind the second row and 54 cubic feet of the overall cargo volume, which is less cargo space than most rivals offer.

Considering all the updates in the past few years, we expect that the 2023 Audi Q5 will carry on with the same or very similar list of standard and available features. For reference, the current model comes standard with goodies like a 10.1-inch touch screen, Android Auto, wireless Apple CarPlay, Bluetooth, two USB ports, HD Radio, a 10-speaker stereo, a Wi-Fi hot spot, wireless device charging, tri-zone automatic climate control, a 7-inch digital instrument cluster display, a universal garage door opener, and an auto-dimming rearview mirror.

Things under the hood shouldn’t change, so the 2023 Audi Q5 should come with the familiar 2.0-liter turbo-four in base models. This engine puts out 261 horsepower, which is enough for most drivers. However, this engine is less efficient than turbo-fours from rivals like BMW X3 and Acura RDX, so the fuel economy goes around 23 mpg in the city and 28 mpg on the highway. That’s below average for the class.

The first upgrade comes in the form of a plug-in hybrid setup, which offers a total output of 362 horsepower. Also, the company recently introduced a new, bigger battery, which provides around 20 miles of the all-electric range.

Finally, there is the SQ5 model, the most capable version of this compact crossover. It comes with a 3.0-liter turbocharged V6, which puts out around 350 horsepower.

We expect to see the 2023 Audi Q5 sometime in the last quarter of 2022. We don’t expect bigger changes in price, so base models should go around 46.000 dollars. Key competitors are models like BMW X3, Volvo XC60, Acura RDX, Lexus NX etc.