Although it’s early for detailed previews, it’s not particularly hard to conclude that the 2022 GMC Yukon will feature no notable updates. Simply, we are talking about a very fresh model, which arrived last year with significant updates. The new generation is better in every aspect than its predecessor and feels far more appealing. It looks better, it rides better and, most importantly, it is even more spacious than before.

Considering all the improvements that came with the recent overhaul, we can say that you may count on more than a couple of possible additions to the list of standard equipment. The overall layout will certainly remain the same, so you may expect a model that looks muscular, rides well and offers a decent level of refinement. Furthermore, it offers a long list of standard and available equipment and, as we already mentioned, its cargo area offers tremendous amounts of space.

Since there are no bigger changes to come for the next year, we presume that the launch date will be scheduled for the last quarter of 2021. 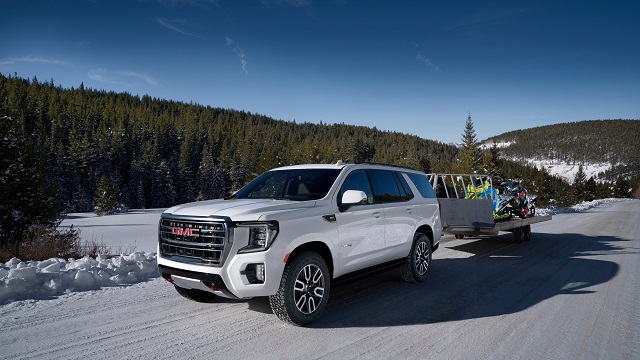 In terms of base design characteristics, the 2022 GMC Yukon definitely won’t bring any change. The current generation is fresh and rides on GM’s latest T1 platform. Naturally, most of the mechanics are borrowed directly from Sierra, but there are some exclusive design solutions as well. For example, a rear independent suspension is standard and it has a highly positive impact on handling, comfort and ride quality in general.

Visually, you can notice a lot of influence from Sierra, especially at the front, where things are nearly the same. The of the body comes in a typical GMC manner and with 121 inches in wheelbase, it’s no wonder that Yukon looks more like a wagon than a typical SUV. Like always, the Denali trim brings a plethora of exclusive styling details, such as chrome grille, unique wheels and plenty of flashing chrome around the vehicle.

The best we could see for the next year are additions in terms of new color options, though even this kind of update doesn’t seem particularly likely.

GMC doesn’t practice bigger interior updates during the production cycle and as we are talking about a very fresh model, there is no doubt that the cabin of the 2022 GMC Yukon will remain the same. This definitely isn’t a bad thing, considering that the new generation has brought notable improvements in terms of style, materials and build precision.

For the first time, Denali features a completely different dashboard. While standard models feature a simpler dashboard, with a tablet-like touchscreen, Denali is characterized by a more massive dash, as well as by an integrated infotainment screen that’s in line with the instrument cluster. Of course, this one looks a little bit fancier, but you will be more than pleased with the look of the standard dashboard. 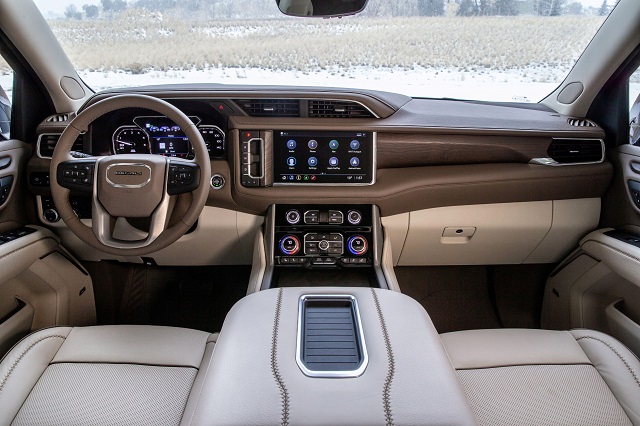 Still, an average Yukon driver probably cares more about what’s behind. There, you can find three very spacious rows of seats. Typically, the first two rows are very generous and offer way over 40 inches of legroom. The third row is good for about 35 inches, which is also more than enough to accommodate adults with ease.

The cargo area is probably the best thing about this SUV. You may count on 25.5 cubic feet of space behind the third-row seats. That expands to 72.6 cubic feet with the third-row seats folded down and 122.9 cubic feet of the total cargo volume. That’s the best rating in the class, along with Chevy Tahoe. If you need a reference, we would say that this is more than you get in a stretched Ford Expedition. This model also offers a stretched version but that’s a whole new dimension now, as it counts all-away up to 145 cubic feet of total volume.

Yearly updates are mostly about new standard features, so the 2022 GMC Yukon will probably come with some of them. However, don’t expect too much, as the current model already stands very well in this aspect. It comes standard with goodies like a 10.2-inch touch screen, wireless Android Auto and Apple CarPlay, six speakers, satellite radio, HD Radio, a Wi-Fi hot spot, six USB ports, and Bluetooth. Practically, the only options are things like navigation and a rear-seat entertainment system.

So, we presume that GMC designers will rather focus on new color schemes and similar things when it comes to updates for the next year. 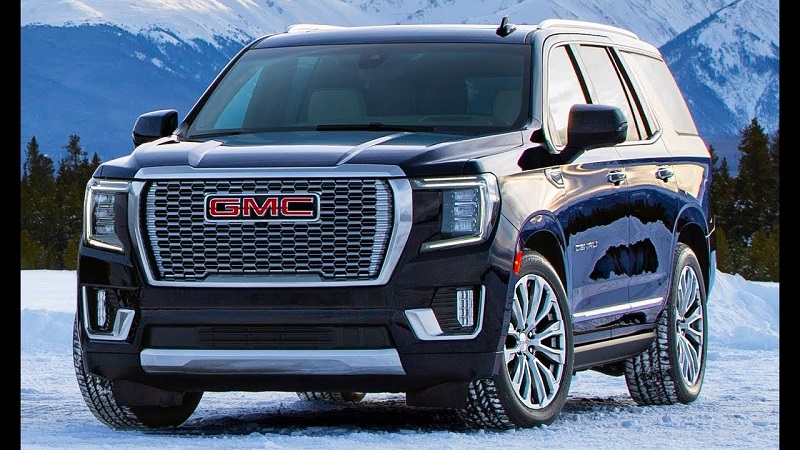 All three engines come in pair with a 10-automatic gearbox, which shifts smoothly and generally feels very refined.

As there are no significant updates to come, we presume that GMC won’t rush with the launch. We expect to see the 2022 GMC Yukon on sale sometime in the last quarter of the year, with a starting price of around 52.000 dollars. Of course, some of the key competitors are models like Ford Expedition, Toyota Sequoia, Nissan Armada etc.